You are here: Home / Destinations / Africa / Escorted by the Police…

“No. No. No,” the officer shouted as we left our hotel. Waving us back into the hotel he yelled something in his radio and motioned for us to wait. Confused, we looked at each other and shrugged our shoulders. Five minutes later the officer received a message on his radio and escorted us to dinner. Fully capable of order and eating yummy falafel on our own, the whole situation seemed like overkill. Just one night away from Cairo and the completion of our Capetown to Cairo overland adventure, we were annoyed at the constant police escort we seemed unable to shake driving from Luxor to Cairo. A few years ago foreigners were required to travel this route in convoy, but to our surprise that system has been downgraded to individual police escorts. Clearly the Egyptian government felt it necessary to protect us, but from what? No explanation was given on why two police cars, one in front of us and one behind, and eight officers had to escort us through Asiyut, nor why we weren’t able to leave them behind anywhere. For nearly the entire journey we had at least one police vehicle in front of us leading the way or a plain clothed (but armed!) officer seated in our front seat. It was strange, uncomfortable and frankly attracted a lot more attention than we would have on our own.

Arriving in Cairo we subtly inquired about the 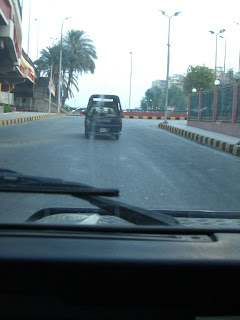 police escort. According to the guys at our Cairo hotel, the area from Luxor to Cairo is the center of Islamic Fundamentalism in Egypt. This may be true, but walking through the market in Asyut, even with our armed escort, we attracted only curious and positive attention. Several teenage girls in chadors approached me and in excellent English asked my name, where I was from and where I was going. They seemed very excited to meet me and welcomed me to their city. It was the exact opposite of feeling threatened. Other Egyptians at our hotel in Cairo gave us various theories on why we needed such a heavy escort, none of which we were able to validate.

Perhaps its better that we don’t know the danger we were in. We never felt unsafe or threatened anywhere in Egypt even stopping in villages along the Luxor to Cairo route. Without a doubt the Egyptian police were extremely professional and polite, going so far as to refuse baksheesh (tips). Well ok, one group of officers did repeatedly request we stop for coffee or tea and when we finally relented, they drank as well, so mostly without baksheesh. Given that the government felt their presence was necessary we appreciated their company, but would have rather known what we were getting ourselves into.  We never felt unsafe in Egypt, but having the police escort made us wonder what we had missed.