You are here: Home / Archives for flashback

It was about noon when we walked across the border into Mexico.  Although we didn’t want a trip itinerary, we had planned ourselves a little bit of a route through Baja to help get us started.  It was literally our first day of a two year journey and once we figured out where we had to go to get our passports processed (most people didn’t actually need to do even that) we began the trip south.  We were filled with anxiety, excitement and fear and  we didn’t know how to do a single thing. 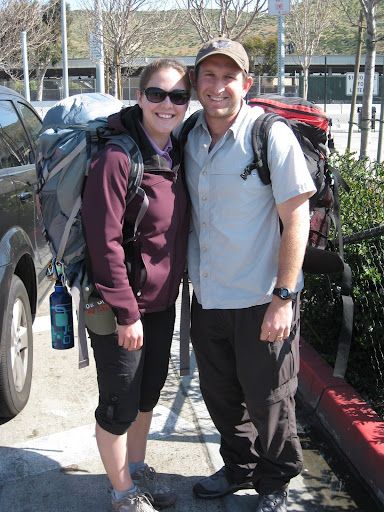 After heading a few hours south from the border we arrived at the little town of San Quintin and realized two things.  The first was that spending the night was silly because all the buses heading south only ran through the night.  The second thing we learned was that Jill’s rule of ‘never sleeping on a bus’ was to be broken very quickly.  We purchased tickets south, found some excellent Mexican food, ate dinner, and then boarded the 3rd bus that came through.  The ones prior to that would have gotten us to our destination too early, a 5am arrival was as early as we were willing to push it despite the desires of several drivers who wanted to take us onto their bus so they could keep our fare for themselves.

We arrived in Guerrero Negro while it was still dark and hung out with a couple of Mexican tourists who also wanted to visit the whales.  Our only memories from the bus are a vague recollection of policemen walking up and down the aisle at a checkpoint; otherwise we slept the whole time.  As dawn broke, we headed to book what was one of the most amazing activities of our entire trip. We drifted in our boat for close to 20 minutes before the whales were spotted. Each time a white cap crested in the horizon I gasped thinking it was a whale. Just as I was about to call the trip a bust, a huge burst of water exploded from in front of us. As we drifted closer, the entire boat listed to one side as all eight of us clamored to get a better view of the passing animal. To say these animals are huge is an understatement. To say they are friendly is the understatement of the century.  These whales were like puppies.  They came up to our boat, nudged the boat, rolled onto their backs for a tummy scratch, waved their fins, and even seemed to mug for the camera.  We actually got to touch the whales, several times, as they swam next to our boat. Click here to read more…


Our adventures in Baja didn’t stop there.

After the ride we were approached by a Canadian couple who were heading the same way as us to celebrate their retirement.  They didn’t have space for us in their car but invited us to stay with them once we all arrived in La Paz. We accepted and together we spent several days together.  Some of that time was spent on the beach but we took another boat trip together where we were attacked by pilot whales, clearly not as enjoyable company as the gray whales, but swimming with the sea lions around the island of Espiritu Santu was awesome.

At the northern most tip of the island we stopped to snorkel… at a sea lion rookery…with sea lions. Yes, with sea lions. A surreal sea-world experience, snorkeling with the sea lions was as exhilarating as it was frightening. Click here to read more…

IF YOU GO: The Baja peninsula is a marine biologist’s dream.  If traveling the length of the peninsula on public transport, as we did, you should plan to travel via bus at night.  There are also tons of vacation packages available that will cover lodging, transportation and even food. We chose to visit the gray whales in Guerrero Negro rather than San Ignacio simply because San Ignacio is not easily accessible via public transport.  Once in La Paz, Espirtu Santu trips can be booked from in town or the beach where the tours depart from one day in advance.  In La Paz you can also book yourself on the ferry to take you to mainland Mexico.